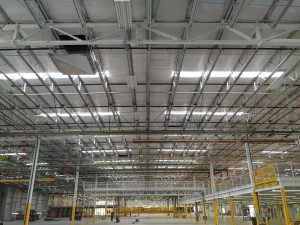 Take a look at the above photo. Either the day is very sunny, or this manufacturing facility is using a lot of energy to gain so much light for production.

Actually, neither scenario is true. In reality, every light is turned off in this building, and the skies are fairly overcast. The light is coming from skylights that have been installed and natural light is “harvested” into the production space.

Do skylights really make a difference in a facility, whether the building is retail space, production space, or office space? Does a brighter, natural light influence the work environment in any way? According to a few folks around DJ Construction who have worked on projects that include installing skylights, the answer to both questions is a resounding “yes.”

Installing skylights allows for a process to occur called “daylight harvesting.” Simply put, daylight is used within a building in order to reduce the use of artificial light. Advantages are numerous, but the three biggest reasons for harvesting daylight include:

1. You save on energy costs.
2. Your employees remain in a more positive mood due to the “sunshine factor.”
3. Brightness influences production & sales, which boost your bottom line.

DJ Construction recently completed a 173,000 sq. ft. production facility for Jayco, Inc., the world’s largest privately held manufacturer of recreation vehicles. Within that facility where luxury motorhomes are made, the contractor installed 286 skylights, or 3% of the roof’s square footage. This is the second Jayco facility in which DJ has added skylights. The photo above was taken in Jayco’s newest facility. 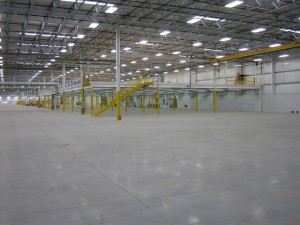 With Jayco located in Middlebury, Indiana, where more than two-thirds of the year receives partly-cloudy to all-cloudy days, the RV company has noticed a substantial difference in energy costs, the amount of energy used, and employee morale.

“Payback in Indiana is anywhere from 6 to 10 years,” said Smith. “Some companies might think the payback takes too long, but consider the fact that energy costs are increasing. That means you’ll see the payback decrease even more quickly as energy costs increase.

“Plus, the Prismax SL™ Skylight lasts a really long time, especially in Northern Indiana where the UV rays are not as intense as somewhere further south. The lights do have a finite existence, but we’re talking a lot of years.”

One Canadian builder, who uses similar skylights as Varco-Pruden, writes:

If you’re wondering how much money you will save, you can expect to cut down your utility expenses from 40 to 70 percent. By contacting the company, you can actually receive an actual number as they will calculate exactly what you will save. The product that can calculate these numbers is called an ESP (Energy Savings Product) that will now be available for builders. The ESP will calculate your annual energy savings as well as the projected payback from the skylight system.

Part of the energy savings depends upon the lighting control system that allows the business owner to dim or switch electric lighting in response to changing daylight availability.

The Lighting Control System
The lighting control system dims electric lights or switches them off during the day to take advantage of available sunlight. The system contains a device that reads available light and sends a signal to the control system to adjust the amount of artificial light being used. The system, then, works by dimming or turning off electric lights based on the natural daylight entering the space.

A number of different control systems are available on the market, but Jayco installed what Smith explains is the most common system: the “three and two control.” DJ Construction’s Pete Garber explains the system: “There are typically six light bulbs in a fixture. Jayco chose to have it where there were either six bulbs on, three bulbs on, or no light on, depending on the time of day and amount of natural sunlight coming through.”

Skylight Myths Busted
One typical complaint about skylight installation is the insulation surrounding the skylights. Clients are concerned about the amount of heat being lost through the skylights during the winter months. The Prismax SL™ Skylight, however, is a triple dome construction and is engineered with a self-curbing design, allowing much less heat to escape. And while heat can escape, Smith said the amount of energy being saved more than offsets what is being lost in heat. “The amount of heat you lose is minimal compared to the overall energy and light savings,” said Smith.

Another concern about skylights is their strength. In the past, skylights were a flimsy construction, made of thin plastic layers. The Prismax Skylights used by DJ Construction are tremendously strong and can hold an average man’s weight; optional fall protection bars can also be installed.

Reason Two: You’re Providing A Healthier Work Environment
Most people work indoors where we receive inadequate natural light to facilitate good health. We need sunlight to perform at our best mentally, emotionally, and physically. Skylights provide what employees need to be at the top of their game. 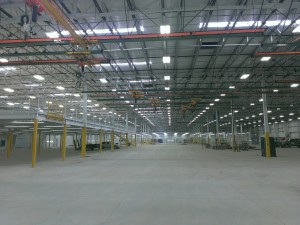 This reason is the biggest factor for Jayco installing skylights, according to Tadd Jenkins, president of the company’s motorhome group.

“The natural sunlight helps everyone’s attitudes and keeps the spirits high,” said Jenkins. “A better work environment for our craftsmen is what we are going for.”

One internet source provides this example:

A 2003 California study found that workers who were exposed to daylight through a window performed 10% to 25% better on mental functioning tests as compared to those without a window view. In general, workers who have access to daylight are more alert, have better concentration, and have fewer absences due to illness. All in all, this means greater efficiency for your business and happier employees.

Both Jenkins and Garber affirm this reality at Jayco, observing positive employee morale seems to be much stronger with the installation of skylights.

Reason Three: Brightness influences production & sales, which boost your bottom line.
Related to the previous reason, when employees are happy, they produce better work. Northern Indiana is a hub for the manufacturing industry that is especially related to the production of recreational vehicles. Our landscape is dotted with massive production facilities. With the installation of skylights, it would be safe to say owners could see an increase in efficiency and production, which in turn boosts the bottom line.

If you are a retail company, skylights could actually increase sales. Consider the anecdote Smith shared: “Wal-Mart found sales went up by 40% in a store where skylights were installed. After further testing, the company realized the increase was a result of those skylights. Now Wal-Mart uses them in at least 25,000 stores…. If you walked in a Wal-Mart on even a partly sunny day, the store most likely wouldn’t even have overhead lights on.”

Why Not?
If skylights can decrease energy costs while increasing work, health, and profit, why wouldn’t a business owner consider daylight harvesting?

Many people are concerned that skylights leak, but Smith even debunks that myth: “If skylights are put in correctly by a certified installer, there should be zero leaks.”

So go ahead, let the sunshine in.

If you like what you’re reading, you can subscribe to our e-newsletters and blogs by clicking here and scrolling down the page.

Energy savings is way more than offsets what you’re losing in heat. Nothing compared to the energy and light savings you’re using. 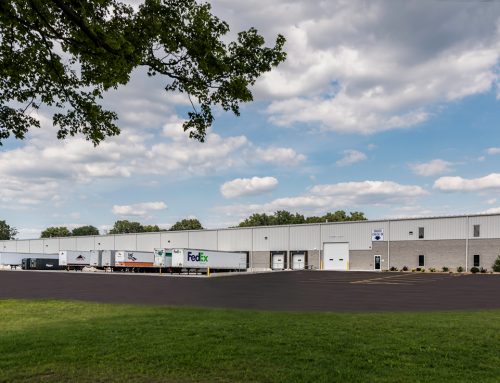 Churches: Find Your Builder with These Questions

Churches: Find Your Builder with These Questions

3 Approaches to Project Delivery – Which One is Right for Your Company?

3 Approaches to Project Delivery – Which One is Right for Your Company?